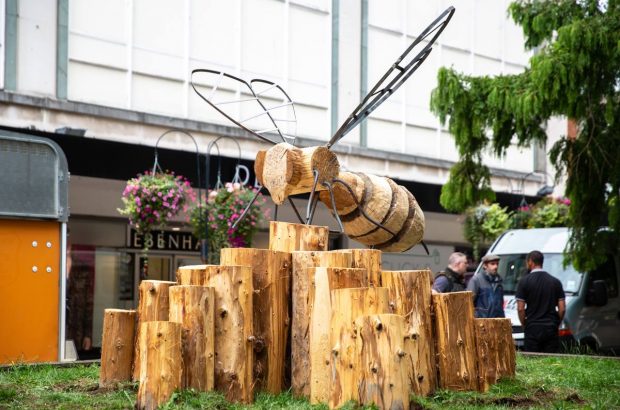 Having spent the latter half of last year working on a series of wooden sculptures and a bench for the Podsmead Milton Avenue Green Space, we were more recently tasked with creating a ‘bee hotel’.

During our time working together last year with the Gloucestershire Wildlife Trust, Nicky mentioned they they’d be interested in having us make a ‘bee hotel’.

What is a bee hotel, you may ask? To begin with, there are multiple types of bees. The sort that most people are familiar with are sociable bees, like honeybees or bumblebees. However, a lot of bees are solitary. This means they don’t live in colonies and as a result make their own nests. This is where a bee hotel comes in handy – it provides a ready made structure for them to nest in.

Keeping in line with our previous work, we decided on creating a sculpture that would double up as a bee hotel. It would then take pride of place at King’s Square in Gloucester, thanks to co-operation with the local Council, and liven up the surroundings. There are also plans to surround the sculpture with a variety of plants and flowers, courtesy of the Wildlife Trust.

Our intrepid woodworking group, led by Jon, got to work on designing and creating the bee. The majority of the wood used was sourced from Highnam Court, a local country house owned by a former High Sheriff, Roger Head, who has on many previous occasions been kind enough to let us use wood from there.

Another volunteer of ours, Mick, welded the legs and wings out of scrap metal.

Last Friday we took the bee from our woodworking shed and placed in King’s Square where it will hopefully remain for the foreseeable future.

Down at the Allotment