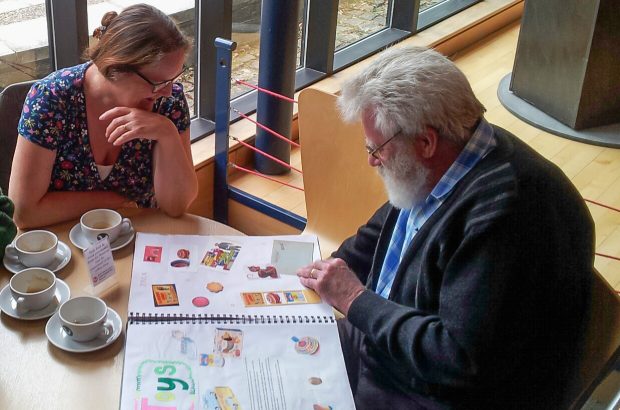 As she sat with her coffee a huge smile erupted on one woman’s face and she burst into song, with her rendition of ‘Rock Around The Clock’. She had been looking at photos from a reminiscence project done by year 8 pupils at a local secondary school and couldn’t help rolling back the years when she saw an image of Bill Bailey.

A daughter of another couple said: ‘it was fantastic seeing all the old photos, it brought back loads of memories.’ Chatter and laughter filled the lobby of the Museum in the Park in Stroud where people meet before taking part in one of the Gentle Park Walks, developed by Fair Shares to be accessible to anyone who would enjoy such a walk including those living with dementia.

The reminiscence project had focused on awareness about dementia and included an afternoon tea at the school for anyone affected by the brain disease. The pupils work included scrap books full of images of famous singers and film stars such as Frank Sinatra and Marilyn Monroe and everyday items like sewing patterns. Many of the pupils had relatives living with dementia and one of the suggestions during the tea was that they could search for a person’s favourite music on their smart phone and then listen to it together.

But because only a few people living with dementia were able to come to the tea, the Fair Shares organiser suggested showing their work to the Gentle Park Walk group. And that is how Bill Bailey’s famous track came to be heard in the lobby of the museum a week later.

A care worker who brought a group to the park walk was so impressed by the pupils’ project that she took the work back to her care home to use in reminiscence sessions with other residents. She contacted the school and an invite for pupils to visit the care home will be forthcoming. The generation clock has come full circle. 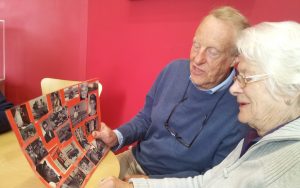 This was originally written for the Gloucestershire Gateway newsletter.

Donations can help us continue the work around dementia we do in Stroud, either by allowing us to train more volunteers for our gentle walks and spread their reach or by helping us create more postcards for our ‘Chance to Chat’ project.

Check out Ways to Donate.

Our Time to Shine

These People We Love